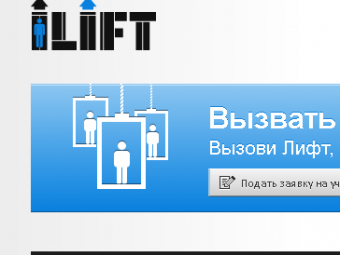 From July 3 to August 3, Moscow will host a casting of Lift project. Investors will select the best startups in digital-media, Internet content and anti-piracy, evaluate innovative advertising technologies and hi-tech applications for mobile devices.

The shooting will take place in Moscow, Israel, Singapore, America and Europe to select startups for potential investment! We will begin with a search for media start-ups with major advertising and media holdings. Lift will offer start-ups to participate in the Global International exhibition of digital technologies and New Media, MIPCOM content from 8th till 11th of October, 2012 in Cannes - Samuseva Manana, the creator of Lift shares her plans.

Lift is Russia's first multiplatform about startups, investors and money - it's a real media startup, where Investment Technology Valleys in the United States, Singapore, Israel, Finland, Korea, India, China, Taiwan and Japan are demonstrated online in Russian as ecosystems of start-up environment, venture capitalists and business angels. And the most important thing is that you can see real investments of professional investors and private businessmen in innovative technologies such as media, hi-tech, nano-tech and e-commerce.

The creator of famous game Angry Birds Peter Vasterbaka is sure that the project will bring together talented entrepreneurs, and says that it is really nice to see that there are a lot of really original ideas in Northern Europe and Russia; obviously, this hot and global trend favors the launch and creation of new mobile startups.

Michael Il'ichev, the Director of Rutube (Gazprom Media Holding) says: We are focused on startups in multiscreen technology and heavy content, aggregation methods and video of users interest recommendations, increasing the relevance of media advertising, for example, in targeting, authorizations through pattern recognition in video, audio, and possibly RTB systems - Real Time Bidding.

The experts of Lift named trends of 2012 year and listed ideas that are attractive to invest in. According to the managing partner of iTech Capital Gleb Davidiuk, services for mobile devices are still one of the first places in the list of priorities for investors. Geolocation, social functions and augmented reality in various non-standard combinations will be of users’ interest in the near future.

Russian media market has fundamentally different tasks - the director of REED MIDEM Alexander Modestova says - It is the monetization of content on the Internet and the creation of children's brand and content, innovation in advertising start-ups through interaction with the audience and fan-community on the Internet. MipLab evaluates startups in digital-advertising and content, mobile applications.

If you have a business project in Digital-Media, content, advertising, mobile applications and you are looking for a first or second round of investment, fill out an application on the website www.i-Lift.TV, - the creator of Lift, Manana Samuseva invites.

Minsk to conduct an exhibition of startups Startup Day