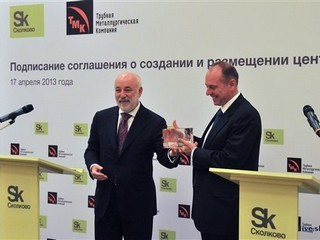 Skolkovo President Viktor Vekselberg and the Chairman of the Board of TMK Dmitry Pumpyanskiy signed an agreement on April 14, 2013 for the creation of an R&D Center of JSC TMK in Skolkovo Innovation Center.

The agreement defines basic parameters of the formation and functioning of TMK’s R&D Center in Skolkovo. The Center of one of the world's largest manufacturers of pipes for the oil and gas industry will focus on the development of efficient technologies for exploration and production, and transportation of hydrocarbons, as well as the creation of new solutions to improve the energy efficiency of key processes in the steel industry.

According to preliminary estimates, the total investment in the construction and equipment of TMK’s R&D Center in Skolkovo will be from $40M to $50M. The center should reach design performance in 2015.

Under the agreement, TMK will also consider projects of Skolkovo members to assess the prospects for the introduction of their developments, take part in conferences organized by the Skolkovo Foundation, exchange information on current and future work of the R&D Centre. The innovation city, for its part, will give the Centre the right to use the infrastructure and services of Skolkovo.

KamAZ truck maker to build its own RandD Center in Russia?s Skolkovo