The venture Fund “Addventure” invested in the service of online-registration 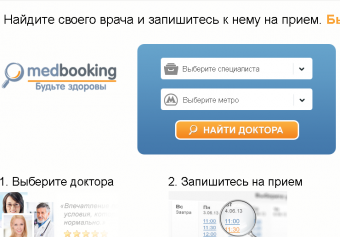 The project “Medbooking.com”, which represents the service of online-registration in medicine institutions of Moscow, attracted its first round of investments from the Fund “Addventure”, which has invested in the project $1,5M. The “umbrella” project “Medbooking.com has been founded as a result of the search service and online-registration to the dentist “Timetovisit.ru” scaling. Last year the “Addventure” jointly with the “ITechGroup” invested $5M in it.

“The project has been developed very well, but has been focused only at one segment of medical market. The resource owners have learned the branch and understood that need in such services exists not only in dentistry, but also in other medical directions, - said representatives of the “Medbooking.com”. – In this connection there has been taken a decision on creating the “umbrella” project, which would include opportunities of online-registration in medical centers of various specification, and also cosmetics salons and dental clinics”.

The project “Medbooking.com” has started in August 2013. The service offers users an opportunity immediately register to the doctor, get help of the professional doctor, read opinions about clinics, discuss important topics on the forum. For professionals the portal offers assistance in selecting the medical stuff, and also opportunity to increase amount of their patients. At the moment the project includes 770 Moscow clinics. The “Medbooking.com” plans by the middle of 2014 to increase this amount up to 1,5 thousand organizations.

The managing partner of the Investment fund “Addventure” Maksim Medvedev is sure that the service copying “Timetovisit.ru” and the experience, which has bee received during the time of the project development, will allow creating a successful and actual on the market recourse, which unifies Moscow clinics in the network of online-registration.

“This market possesses the formed couple of leaders. It is important how these projects will be developed in the near year and a half. At the moment we overcome competitors by automation. The “Medbooking.com” is the only one field, which executes direct integration with clinics and offers patients not only doctors schedule, but also online-record in the real time”, - underlined director general of the project Aleksander Yugai.