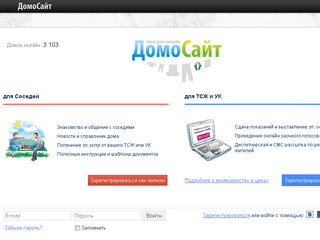 Domosite.ru service, which develops online management system of apartment buildings, has attracted more than $1.2M from an international venture fund Runa Capital and one of the co-founders of the company. The money will be spent on the development of electronic reporting services, integration with public information disclosure portals and databases, and on the promotion of the service.

Domosite.ru is a SaaS-project which offers the housing market participants a multifunction technological platform that solves the basic problems of apartment houses management. Domosite.ru founders created the resource to bring home residents, their management agency and regulatory authorities together at one place, thus creating a community of people who are directly involved in effective management of the house and its property.

According to the managing partner of Runa Capital Dmitry Chikhachev, there are more than a million of apartment buildings in Russia and they need effective management. Domosite.ru solves a significant problem of interaction between residents of apartment buildings, management companies and homeowners associations. Domosite.ru is a great opportunity for management companies to improve their efficiency and to focus directly on the process of house managing, automating much of the organizational work, - he said.

In addition, Domosite.ru offers a set of services to automate the work of managing organizations - mailing bills to residents and collecting meter readings via the Internet, mailing emergency messages and notifications to residents via SMS, maintaining an electronic register of owners, tenants and house property, reports publication (in accordance with legal requirements of information disclosure), the access to the actual base of normative documents and templates, legal support, etc.

The introduction of Domosite.ru to the work of HOA and MC can be compared with the transition of accounting from paper to computer. This process occurred quite recently, was difficult enough, but no one regrets that it happened. The benefits of cloud technologies in housing management are obvious, they can make this process much cheaper and faster - the general director of Domosite.ru Sergey Antipin says. - Domosite.ru is a unique tool to engage the owners in the process of managing and establishing of fully functioning house communities. Homeowners can make their own agenda with the help of Domosite.ru, set priorities in the budget, interact with their management company and get to know their neighbors.

More than 3 million homes in Moscow, Yekaterinburg, St. Petersburg, Samara, Kursk, Ivanovo, Kazan and more than two dozen other cities joined in with Domosite.ru portal during the first six months after its launch, and the total number of apartment owners who actively use the service is over 20K. If we consider that the potential number of users of the service is about 30M households, the project can be very successful. The monetizing of the service is done through HOA and management companies’ monthly fee for the access to basic package of services, and ranges from 1.5 to 10K RUR a month. Additional services are not included and are billed according to the number of people the management company works with.

We are actively developing additional services for the MC and HOAs to meet our users’ needs, - the CTO and founder of the project Ilya Korobeinikov says. We plan complete redesign of Domosite.ru in the near future and implementation of usability-testing results. We strive to ensure that the Employee’s Office on Domosite.ru is an effective instrument for the chairman of the HOA, MC’s head or the Board of an apartment building to implement all their tasks in any Russia’s city using intuitive interface and all the necessary capabilities. In addition, we introduced a new type of user - official person.

According to It-eburg.com site, Domosite.ru was founded by Ilya Korobeinikov about 1.5 years ago and focused on communication and interaction between people in the housing sector. The project received investment from a venture capital firm Projector owned by Leonid Volkov. Moscow company Revdom.ru, which also tried to develop a similar service, joined the structure of Domosite.ru at the time of negotiations with Runa Capital. The office in the capital should help to develop the service and, according to Ilya Korobeinikov, it is politically advantageous. At the same time, the development of the service will be fully in Yekaterinburg. The company currently has about 15 employees including those in the Moscow office and continues to recruit.

LinguaLeo about investment from Runa Capital