Seliger painted in the rain 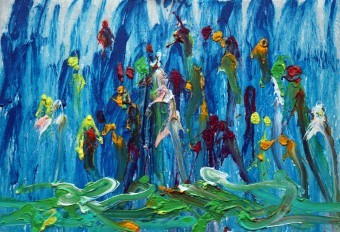 Over the weekend within the limits of the program of Russian Youth Camp Seliger – 2013 there has been conducted a master class on technologies of creative thinking development “New Reality 2.0”. The organizers are: National Association of Innovations and Information Technologies Development, PriceWaterhouseCoopers, Cognitive Technologies, Bank of Moscow, Moscow Institute of Steel and Alloys, United Electronic Market Place and other popular companies, organizations, and scientists, people of art and culture. The event has been conducted with the support of the Ministry of Education and Science of the Russian Federation.

The task for the master class participants was to paint their spirit, feeling and emotions of the day, rain and squall wind on a canvas with the help of common acrylic paint, brush and palette-knife. According to the theory of general rapport by famous Russian and and Soviet painter, pedagogue, organizer of a new system of education and innovation thinking development Ely Bielutin, which comprises the basis of the project “New Reality 2.0”, fine arts is the most bright form of appearance of creative potency of a human being. Namely the process of painting allows visualizing various ideas, visually imagine numerous isolated its elements and make between them unexpected connections. Sessions on the program “New Reality 2.0” gave an opportunity to formulate thinking schemes, giving possibilities to complete more effectively and unconventionally various practice tasks. It is well known that use of the theory of general rapport in fine arts gave birth to more than 20 global directions. On its basis many famous foreign practices are based on. The positive experience of a project “New Reality 2.0” application has been recommended in April of this year by The Public Chamber of Russian Federation for its distribution between Russian Educational Institutions.

According to the president of National Association of Innovations and Information Technologies Development Olga Uskova, “Leaders of various markets united their efforts in solution of one actual task of innovation and education spheres all over the world – development of improvement technologies for creative thinking. On most authoritative expert fields, including Saint Petersburg and Davos Forums, it has been noted that competition between the lading countries transforms to intellectual angle. And in this sense the process of methods creation, which allows preparing experts, who are able to effectively complete tasks, represents a serious competitive advantage and is of a high level of importance. It is well known that recently a range of leading Western Universities, including Stanford and MIT, marked as priority education directions – humanitarian technologies of creative and thinking process development”.

On the field of Seliger 2013, despite the downfall and squall wind, gathered more than 60 people, wishing to take part in a master class. It is important to note, that painting skill was not obligatory for participants, and more than 90% have never attended painting classes. 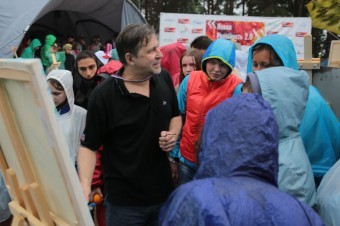 According to a leading of the master class, famous Russian painter Vladimir Vinogradov, “Despite the first experience of most of the participants, the results are very interesting. Most of works are possible to exhibit on leading Moscow camps and auctions. I suppose that cost of some of them can exceed hundred thousands of rubles”. 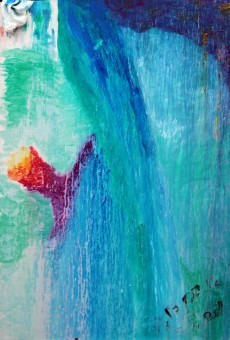 Lecture about innovation accelerators will be conducted in the RIA Novosti