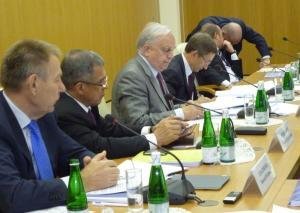 A visiting session of the State Duma Committee for Science and High Technology that debated the legislative support of regions involved in innovation development, as well as a new bill on the Foundation for Advanced Studies that was submitted to Duma in June by the President of the Russian Federation, took place in June 28, 2012 at the Congress Center of Special Economic Zone Dubna.

The meeting participants visited the Laboratory for High Energy Physics of Joint Institute for Nuclear Research (JINR) that implements a project of mega-science class to create a heavy ion accelerator complex NICA, and scientific-industrial complex Beta for the production of modern medical equipment for cascade plasmapheresis to be put into operation the next year at the right-bank of SEZ Dubna. The meeting was held at the Congress Centre of SEZ Dubna on the left bank of Volga River.

According to the chairman of the Committee on Science and High Technology, academician of RAS Valery Chereshnev, this is the third visiting meeting of the Committee in Russian regions. This time it was held jointly with the Association of Innovative Regions of Russia (AIRR) with the participation of federal ministries and departments representatives, public institutions of development, representatives of science cities, the Skolkovo Fund, Centers of Innovation Development of Russian regions, representatives of scientific organizations and high-tech businesses.

A report on the first issue was made by the President of the Republic of Tatarstan, Chairman of the AIRR Board Rustam Minnikhanov.

The presentations of the speakers, including representatives of government, development institutions, as well as innovative community members, analyzed the experience in the formation and development of innovative regions and associated problems, brought different legislative proposals to improve legislative support of such regions. The proposed amendments to the Federal Law On the status of scientific city of the Russian Federation and the Federal Law On Science and State Scientific and Technological Policy will be considered to prepare the bill to the second reading.

A report on the draft federal law the Foundation for Advanced Study was presented by First Deputy Chairman of the Military-Industrial Commission under the Government of the Russian Federation Yuri Borisov. It was decided to recommend bringing this bill to the first reading in Duma in early July.

A scientific school of innovation companies management in Dubna