NAIITD discussed the prospects of the Russian Youth Innovation Community 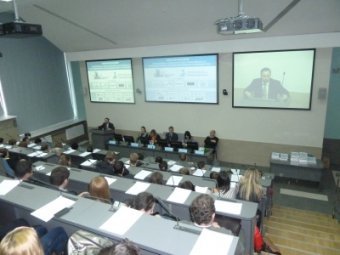 The Problems and Prospects of the Russian Youth Innovation Community conference organized by the National Association of innovation and information technology development (NAIITD) took place on February 21, 2012 in NITU MISA. The following issues were discussed during the meeting: the problems of forming a unified national innovation policy, support mechanisms for innovative start-groups issues, as well as the Russian and world innovation technologies market development prospects.

In her speech, NAIITD’s President Olga Uskova reported that at present several largest international analytical agencies have made long-term forecasts of global market innovation technologies development. According to the summary reports, such areas as smart city technologies, home and military robotics, satellite systems, mobile and virtualization technologies will be greatly developed. She stressed that young designers should always consider the data from these projections in the thematic formation of their innovation projects, because major venture capital funds will focus on it in the selection of projects for investment.
NITU MISA’s rector Dmitry Livanov marked that the success of innovation policy depends not only on the capital investment amount, but also on the presence of innovation thinking - that is the ability to create and adopt novelties. Today this is the most important Russian problem, which is still to be worked at.

RAS Correspondent-Member Vladimir Arlazarov pointed out that he was impressed by the youth projects’ professional level recently demonstrated the by young developers. This indicates the high potential of the Russian youth sector growth, its ability to quickly learn and adapt to new conditions. He said that it is the young innovators who need serious support and attention, as everything new in science and technology is usually brought by the young. The older generation in this case serves as mentors and facilitators in their scientific research.

Challenges of youth innovation industry. Ways to solve roundtable discussion was the conclusion of the conference. Its participants were NAIITD board chairman Nikolai Nikolski, the RF Public Chamber member Anna Bukhalo, the RAS Young Scientists Council chairman Vera Mysina, as well as representatives of youth innovation teams. They discussed a wide range of issues concerning an effective youth policy forming in the field of innovation.