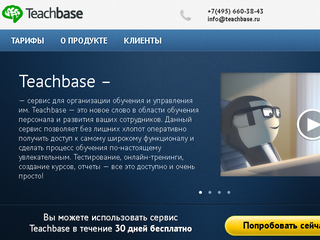 The first company which received investment from Moscow Seed Fund is Teachbase that operates in distance learning. This transaction has been prepared by Amalthea Capital Partners, the authorized investor of the Fund. The money will be spent on the development of the company’s services.

Moscow Seed Fund was established by the Department of Science, Industrial Policy and Entrepreneurship of Moscow.

Angel fund Amalthea Capital Partners was established in 2012 on the basis of Moscow State University’s Science Park to invest in IT-companies at the seed stage. Amalthea’s partners invest their own funds and actively help the teams to make the first steps to the market.

Startup Teachbase provides the service to train employees of client companies. Training precedes the testing of staff to checks its quality. Testing is conducted when it is convenient for people involved: no need to organize a general meeting. It is also possible to test not only employees, but also partners and customers to check how effectively the latter use company's products.

In addition, Teachbase allows online-training, online meetings, webinars, creation of your own courses. The service’s clients have instant access to all the information about the learning process (both quantitative and qualitative) that allows you to quickly adjust the curriculum and monitor the performance of your employees. Each employee gets a personal account with up-to-date information and schedule.

According to Vasily Petrechenko, a partner of Amalthea Capital, Teachbase project is primarily a determined team, growing market and clear business model. We believe that in our country, with the growth of competition between the companies, the need for distance education of staff will grow faster and faster, Petrechenko says noting that the investment will be spent on the development of the first version of the service on the basis of the prototype, which was presented to investors.

As for the deal, we were pleasantly surprised that the Fund was flexible in negotiating the terms of financing because it is more typical for private investors, rather than for state development institutions. I would also thank the team of the Fund, which actively participated in the closing of the transaction and the preparation of necessary documents, - Vasily Petrechenko said.

We enthusiastically agreed to work with the Foundation, since the proposed scheme allows us to make 3 times more transactions than just investing our own funds. I believe that this experience can be a good model of innovation support mechanisms in other regions of Russia too, - Oleg Movsesian said, the director general of the Science Park of MSU.

Recall that in early September, Moscow Seed Fund held the first meeting of its Advisory Council and decided to invest in two projects in information technologies.