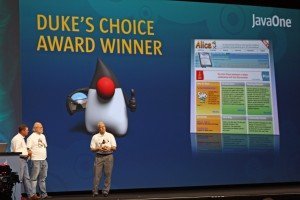 Russian startup Jelastic, which develops a new generation of cloud service, has been declared as the winner of Technology Leader category of the last Duke's Choice Award 2012.

Duke's Choice Awards is an annual international award in Java-technology. The main criterion for awarding is innovation. Jelastic contribution to the world of Java is the development of cloud hosting platform Jelastic Java Cloud.

Jelastic Company was founded in 2010 to create unique offerings in the market of cloud services. The main activity is providing cloud hosting for new and existing web applications.

Jelastic shared the podium with nine projects including a framework for distributed computing Hadoop Project, an online tutoring platform Parleys.com and Liquid Robotics - a system for collection information in the ocean (the project of Java-language creator James Gosling).

We are honored to receive the Oscar of Java-technology - The Duke's Choice Award, - the founder and CEO of Jelastic Ruslan Sinitsky says. - In just one year of existence our company has changed the cloud computing, providing the first auto-scalable platform without limitation and available around the world: in the USA, Germany, Great Britain, Russia and Japan.

Jelastic plans to increase the number of hosting partners around the world next year to improve the technology and make life easier for developers.

In December 2010, Jelastic attracted seed investment from venture fund Runa Capital, and in May, 2012 - $2M from venture capital funds Almaz Capital Partners and Foresight Ventures. In the spring of 2012, Jelastic company received a grant of $1M from the Skolkovo Fund to develop a new generation of cloud service – auto scalable private hosting platform for enterprise applications Jelastic Private Cloud (JPC).