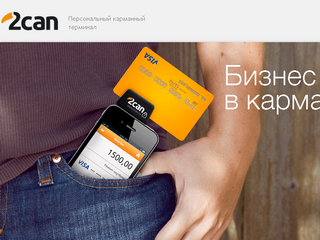 Smartfin company is a Russian startup, created for the development, implementation and operation of a payment via smartphones service, announces today the raising of $1.6M in the first funding round. The main investor of the project was InVenture Partners venture fund.

Smartfin developed and implemented a handheld payment terminal 2can in the Russian market, which is an innovative payment service through bank cards that allows a trade and service company to use a smartphone or tablet (on iOS or Android platform) as a secure mobile device to accept card payments anywhere and at any time. 2can handheld terminal is a special application and a card reader which turns a smartphone into a terminal for accepting payment cards Visa and MasterCard. 2can platform is focused on online retailers and entrepreneurs who cannot install payment terminal devices for financial or logistical reasons.

2can service is a Russian design, an analogue of the U.S. service Square which started in 2009 with a $10M series A financing and has attracted more than 2M customers being estimated at $3.25B.

2can project was founded in November 2011 by a graduate of Startup Academy of Skolkovo Nicolay Zhmurenko (previously the CFO of national operator Synterra), and Yuri Vladimirov (previously the CFO of Inoventica group of companies). The investment of the partners in the project is about $300K and was invested in the initial organization of business, the first version of the application for devices based on Android, iOS and the processing system to ensure secure payments.

The first official 2can project’s partners were Visa and PSB. International payment system Visa certified 2can service, and PSB became the acquiring bank. The service was launced on September 21, 2012.

Received $1.6M will be used for technical and commercial development of 2can service, creation of a partner retail network and marketing promotion. In addition, it is planned to integrate 2can solutions with a wide range of partner banks.

Russia has issued more than 190M cards, their annual turnover is over 16 trillion rubles, but the vast majority of cardholders prefer to use them just to withdraw cash from an ATM. This is not surprising, as only about 17% of trading companies in Russia, working with individuals, accept bank cards - the CEO and founder of Smartfin Nicolay Zhmurenko says about the potential of 2can project in the Russian market. - We believe that businessmen will appreciate the potential of the solution that would give the customers convenient and secure payments.

IBS financed a Startup of its top-manager