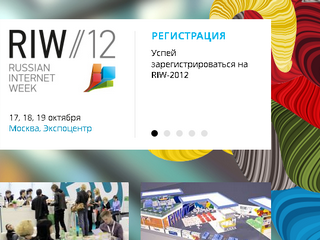 The Program Committee of the V Russian Internet Week, RIW-2012 announced the expansion of its events schedule. The anniversary fifth week will include a large number of interesting reports that could not fit the time frame of the previous year’s events.

The total number of reports for the past four years was based on the scheme of five parallel units, but in the preparation for the anniversary V Week the Program Committee received a great number of applications of really good and quality reports. Even an increase in the timing of each section could not accommodate all the things we would like to tell the participants, so the sixth stream was organized which is Orange hall, - Sergey Plugotarenko says, the Chairman of the Program Committee of the Russian Internet Week.

The Orange hall will be devoted to the subtleties of doing business on the Web - doing business and management of Internet projects. There will be covered such topics as finding employees, teams’ training, freelancers and outsourcing, projects and team management and so on.

To actively participate in the sessions and roundtables Orange Hall invited Leaders and owners of online companies, managers of large projects, middle and senior managers, the leaders of start-up teams and other stakeholders.

Recall that the Russian Internet Week will take place from the 17th to 19th of October in Moscow, in Expocentre at Krasnaya Presnya (hall № 3). Registration and a registration fee of Professional participant required to visit the venue and participate in the conference.

The organizer of RIW-2012 is Russian Association of Electronic Communications (RAEC). The strategic partner is Rostelecom.