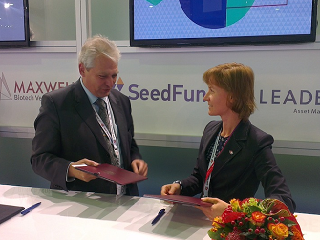 RVC Seed Fund withdrew from the capital of MAROMA Technologies; management company Sberinvest bought the share of the Seed Fund in the amount of 25.5%. The deal has not been reported. The signing of the purchase agreement took part at the Forum for Innovation Development Open Innovations.

The withdrawal of RVC Seed Fund from MAROMA Technologies company means the completion of the seed stage, the purpose of which was to create a prototype and bring it to the level of a commercial product. At the same time, the deal between RVC Seed Fund and the MC Sberinvest indicates the beginning of the venture financing or early stage, which is intended for the organization of ball valves DN50 and PN40 production, further expanding the range of manufactured cranes. In addition, it is planned to produce other wear-resistant products using the developed technologies and considering the needs of the market.

MAROMA Technologies company produces high temperature ball valves based on an improved technology for ball valves made of wear-resistant ceramic-metal materials (cermets). The ball valves are designed for the use primarily in abrasive environment and (or) at the temperature about 6000C. There are no ball valves capable of operating in harsh environments produced in Russia, thus, the project is aimed at replacing imported goods with the domestic production that is three times cheaper.

This transaction is a clear evidence of the effective use of so-called innovative lift. The first financing in the MAROMA project was made under the START program of the Foundation for the Promotion of the Development of Small Businesses in Science and Technology, then the project passed the seed stage, and now moves to the next stage – receives investments from venture capital funds – the CEO and Chairman of the Board of JSC RVC Igor Agamirzyan says. - It is important that MAROMA Technologies is a company engaged in manufacturing, which means that it is possible to create successful innovative projects not only in IT and the Internet in Russia.