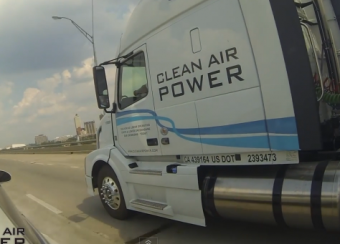 The Company Ervington Investments, belonging to Roman Abramovich, acquired 1,5% of shares of a British developer of hybrid technologies for truck transport Clean Air Power (CAP). Together with him Zara Shvidler, a wife of Roman Abramovich`s partner – Chairman of the Board of Directors of Millhouse Yevgeny Shvidler, invested in the Company. On the whole the purchase cost is five million pounds sterling ($7,8M).

Clean Air Power was founded in 1991. The Company specializes on development of technologies, which allow managing dual fuel engines of truck transport, consuming both diesel fuel and natural gas, which should increase its profitability and ecological compatibility. A developer exists on markets of USA, Unites Kingdom, and Australia.

The Company has conducted an additional issue in amount of 51,948 million of new common shares at cost of 9,625 pennies per one paper. Received from distribution money will be directed on support of marketing and sales in Russia also.

This is a sign investment for the Company. “Investments from the side of Ervington Investments and Mrs.Shvidler confirm a huge potential of hybrid technologies, and support our strategy on European, American and Russian markets”, - stated the director general of the British Company John Pettit.