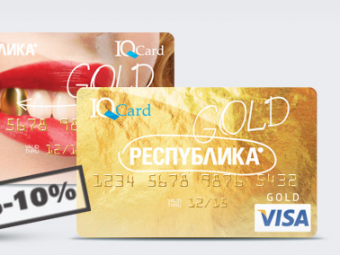 IQcard - the innovation company in the sphere of financial services, which specializes on building and serving loyalty programs for retail networks based on pre-paid bank cards – attracted $3,7M in tge regular investment round. Participation in it took Kenes Rakishev, one large investor, who represents one of the leading IT-companies in Russia, and current investors - Fastlane Ventures and Direct Group, which possess many-years’ experience on creation and development of new projects on Russian financial and Internet markets.

The Company IQcard was founded in March 2012 with support of the Fastlane Ventures and Direct Group. In 2013 the IQcard started cooperation with international payment system Visa, launched the first on Russian market gold pre-paid card and realized partners projects with the largest international touristic operator TUI Russia & CIS and a network of book stores RESPUBLIKA*. Earlier have been realized co-brand programs with Internet-project X5 Retail Group – E5.RU and a network LeFutur. Till the end of the year starts the project with the network Mamas&Papas (Ideas4Retail). The IQcard has also executed an agreement with the central office of the company Samsung (The Republic Korea), thanks to which the service IQcard will appear in application Samsung Wallet.

Commenting the end of the investment round, director general of the company IQcard Yekaterina Konovalova informed: “In 2013 the company IQcard demonstrated dynamic growth and active development. We managed to prove our investors, partners and clients that we possess the required technological and staff potential for successful realization of large strategic projects. Investments attraction in cooperation with the company’s strategy will be directed on services’ development for card holders, widening of opportunities for B2B-partners, promotion of current and launch of the new projects with large retail networks, and also realization of plans for entering markets in other counties. We highly appreciate support of our current investors, thanks to which we have already achieved great results. Strategic partnership with new investors will allow the IQcard strengthening positions on the market and realizing new scaled and perspective projects”.

Marina Treschova, director general of the Fastlane Ventures, comments: “Decision of such authoritative partners to support a new round of financing for the IQcard tells about the right way. The market of financial services is in its very early development stage: cash payments still remain to be the major form of payments in Russian economy. In the near years according to estimation of the A.T. Kearney, the amount of funds in sector of pre-paid card in Russia can achieve $110B – and we believe that thanks to the early start and cooperation with the large retail-players, the IQcard will manage to take the leading position in this segment”.