Skolkovo ASC approved the elements of a quantum computer project 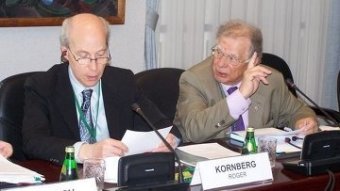 Skolkovo Advisory Scientific Council (ASC) approved a project to develop elements for the revolutionary technology of quantum computers last week during a meeting in Novosibirsk Akademgorodok. The technology allows a very rapid processing of information, a council member, one of the leading nanotechnologists professor of Purdue Institute (USA), Vladimir Shalaev, who presented the project said.

Most important task of the project is a quantum computer. In order to quickly process the information the computers that we have now are inadequate. Although this is not an easy task - not for a year or two, we need to develop components for future quantum computers. One of these basic elements is a generator of single photons, RIA Novosti quotes Shalaev.

He said that this project belongs to The Lebedev Physical Institute of RAS (LPI) and the Institute of Spectroscopy, RAS.

He explained that such projects differ from projects aimed at creating startup companies and receiving funding through the Skolkovo Fund clusters.

He said that the ASC’s decision to finance the project involves $ 250 K for two years. The research will be conducted in two institutions, and a new temporary team of scientists is being created for these purposes.

Moscow?s Kurchatov Institute to develop ?soldier of the future?

100 students are scholarship holders of the Elevator to the Future