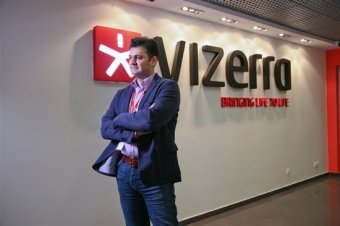 VIZERRA company acquired the status of project participant on the creation and operation of the Skolkovo Innovation Center and became the Technopark resident. VIZERRA is the developer of the software platform for creating interactive 3D-models. The company’s technologies allow to develop cross platform applications visualizing complex multidimensional data in real-time and providing user interaction with them.

The platform uniqueness lies in the fact that it adapts the latest real-time rendering technology for effective business tasks solutions. The technology is used as a visual communication tool for urban planning and complex systems design, organizing events, monitoring processes and presentations.

To date, the VIZERRA Company and the Skolkovo Fund are partners. Architectural and designing functions are implemented based on the VIZERRA interactive 3D-model of the future innovation city. Moreover, all the design shortcomings are being identified, the future city is demonstrated to the public and the representatives of various government levels. The model also allows many architectural firms to integrate their solutions into one project and to work on it jointly in the future.

Under federal law on the Skolkovo innovation center, the VIZERRA company will be granted tax and customs benefits, special conditions to attract foreign nationals to be employed for project implementation. Moreover, the Skolkovo innovation center provides all residents with services to register intellectual property rights, customs brokerage services, office rent and access to scientific and research equipment.

Our company already has a commercial success in Russia and other countries, and being the Skolkovo resident, we decided to develop the root technology designed by us. This technology in turn can be used to create new products. Our priority is scaling VIZERRA technology to other platforms and launching successful products that will add success stories to the Skolkovo technopark - says Arman Gukasyan, the CEO and author of the VIZERRA project. Anna Nikina, the Skolkovo Technopark director of international programs development, commented: We are glad that such an interesting and promising company that we already know as a Skolkovo partner is now listed in the project participants ranks, and is located here in the Skolkovo Technopark.

VIZERRA is an author's technology of building interactive 3D-models allowing to quickly and easily create virtual copies of the projected and actual objects of any complexity by transforming large volumes of static data in interactive 3D, while maintaining photorealistic and small file size.