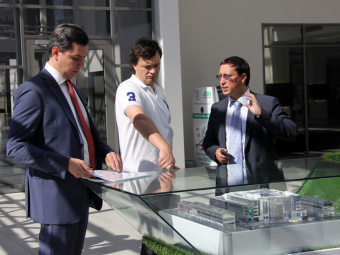 A mega-project of Innopolis, created by Kazan IT Park, is gaining momentum. This is evidenced by recent events connected with this project.

A visiting meeting was held last week on the establishment of Innopolis. The meeting was held by the President of Tatarstan Rustam Minnikhanov and the city has become of investors’ interest. For example, Kazan IT Park was visited by the Vice-Chairman of Vnesheconombank Mikhail Poluboyarinov today, industrial park’s report says. He was primarily interested in Innopolis, because the Bank is considering participation in this project. The Minister of information and communication of the Republic of Tatarstan Roman Shaikhutdinov and director of the Kazan IT Park Dinar Nasyrov welcomed the guest.

First of all a master plan of Innopolis was presented to Poluboyarinov. This is the first city to be built on the post-Soviet territory. The population of Innopolis will be 155 thousand people, 60 thousand of whom are employees of the IT companies.

Next, the guest from Moscow Business Incubator visited Kazan IT Park, where the following projects were presented to him: Eidos, Atodoriya and a system of electronic public services. During the presentation of the last project Poluboyarinov noted that it is similar to the American Neighbor watch, as it allows complaining about bad roads, utility services and etc. Director of IT park Dinar Nasyrov said that our system is much better because it allows citizens not only to record the violations, but also to offer suggestions for improvement of the city and the Republic.

After that, the Vice-Chairman of Vnesheconombank saw single system of emergency services GLONASS 112, and finally Michael Poluboyarinov left his autograph on business incubator’s wall of fame.

After visiting Kazan IT Park Poluboyarinov went to inspect the site of the future city.

A managing company set up for Innopolis project