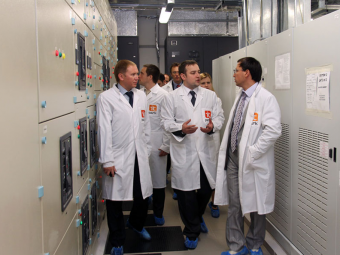 Kazan IT Park’s site is usually of foreign investment funds attention due to the building of Innopolis, since this project to be developed within the public-private partnership, the IT park reports.

A delegation of Russian-German investment fund Wermuth Asset Management (WAM) came to the IT Park. The company specializes in promising investment projects in Russia. WAM not only invests in Russia, but also attracts European investors in Russian projects within more than 13 years in a row. Of course, this company could not ignore this new project of building Innopolis city in the Republic of Tatarstan.

The presentation of Kazan IT Park’s site was held by the director of the IT Park Dinar Nasyrov. Wermuth Asset Management managing partners Michel Hendriks and Eiso Vaandrager were interested not only in investment opportunities but also in the development of the ICT sector of Republic of Tatarstan as a whole. Dinar Nasyrov said that the IT park of Tatarstan has been called the best technology park in Russia for the second year on end. This was achieved due to the fact that Kazan IT Park is one of the few self-benefiting parks in Russia. Nasyrov also said that 64% of the Federal programs’ results in the development of technology parks in 2011 accounts for the Republic of Tatarstan.

Next, the guests saw the data center and Kazan IT Park’s business incubator. After that, the company representatives went to Innopolis’s site.

Wermuth Asset Management (WAM) has been working on the Russian market for over 13 years. It has offices in Moscow and Wiesbaden (Germany). The company specializes in alternative investment strategies in Eastern Europe, especially in Russia.

Russia and Kazakhstan to cooperate at Kazan IT-Park