Russia and Kazakhstan to cooperate at Kazan IT-Park 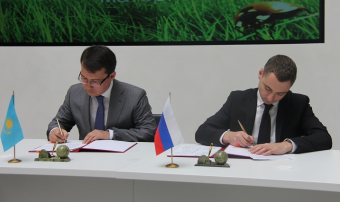 The XII meeting of the Subcomission for interregional and cross-border cooperation between the Russian Federation and the Republic of Kazakhstan took place on the territory of Kazan IT Park. The meeting covered questions of future cooperation in the field of innovation and organization of forthcoming events.

The Russian side was led by the Deputy Minister of Regional Development of the Russian Federation Maxim Travnikov, the Kazakhstan side - by the Vice-Minister of Economic Development and Trade of Kazakhstan Timur Zhaksylykov, Kazan IT Park reports. The meeting was attended by representatives of ministries and departments of the two countries and 11 regions of Russia: Tatarstan, Altai and Kurgan republics, Novosibirsk, Omsk, Orenburg, Samara, Saratov, Sverdlovsk, Tomsk and Chelyabinsk regions.

The site for today's event was determined two years ago - the idea of holding meetings of the intergovernmental commission at the industrial park was proposed by the director of Kazan IT Park DinarNasyrov.

The main topic of subcommittee's discussion was the organization of the IX Forum of Interregional Cooperation between the Russian Federation and the Republic of Kazakhstan on the theme: Innovative Cooperation with the participation of Heads of the States which will take place in Pavlodar on September 19, 2012.

The parties agreed to hold the 13th meeting of the Subcommission in 2013 in the Republic of Kazakhstan.

At the end of the meeting the parties signed an Action Plan for the implementation of the program of inter-regional and cross-border cooperation between the Russian Federation and the Republic of Kazakhstan for 2012-2017. Maxim Travnikov and Timur Zhaksylykov thanked the management of the IT Park for the opportunity to hold the forum at the industrial park.

Representatives of the two countries valued innovations of Kazan IT Park. The Director of the IT Park Dinar Nasyrov noted that some of these developments will be demonstrated during the Innovative Cooperation Forum in September this year in Kazakhstan.

Kazan IT Park actively cooperates with colleagues from Kazakhstan. The signing of a memorandum between Technopark in the high-tech IT-Park and Regional industrial park Aktobe took place in late April this year. The parties agreed to cooperate in order to implement projects aimed at the sustainable development of a competitive economy of the Republic of Tatarstan and the Republic of Kazakhstan on the basis of effective and mutually beneficial use of intellectual capacity and commercialization of new knowledge.