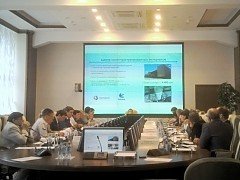 Some prospects for further development of technology parks in high technologies in the Russian Federation were discussed on August, 10 at a meeting in the Ministry of Communications of Russia. The meeting was attended by representatives of regional authorities and the management of technoparks of Kaluga region, Kemerovo region, Nizhny Novgorod, Novosibirsk Region, Samara Region, Penza Region, the Republic of Tatarstan, the Republic of Mordovia, as well as by a representative of Ministry of Finance of the Russian Federation.

There are regions with high efficiency of investment in industrial parks. There are some regions where the efficiency is questionable - the minister said, noting that the performance evaluation is one of the problems of the existing program. Now we understand that it is useless to build industrial parks in each region, because of different conditions, - the minister said. - Most likely some adjustments to the program will be adopted. It is necessary to define objective criteria for assessing the conditions the success of the industrial park depends on. Technopark is not the construction, this is an ecosystem, - he recalled. According to Nikolay Nikiforov, it is important to move from budget subsidies to budget investments.

The head of the Ministry of Communications presented the Deputy Minister of Communications Mark Shmulevich to the meeting who is charged with the comprehensive development of the technology industry. The Minister said that one of the problems of the industry is in the fact that many successful Russian IT companies eventually go abroad. Proper development of industrial parks, according to Nikolai Nikiforov, can help to solve this problem.

Mark Shmulevich said that the physical infrastructure is not the only component of the industrial park. What companies need is a set of required services, that will encourage them to become residents of the parks and in the end to rock innovation environment in the regions, - the deputy minister noted. These services include assistance in staffing, training, management, access to manufacturing facilities for companies and much more.

Participants presented their technoparks, made plans and outlined the difficulties that they have to overcome. Much attention was paid to the legal aspect of managing companies, the majority of those present considered open joint stock company as the optimal form.

It is believed that the state is an inefficient owner. The most effective supervisor is a private owner. Therefore it is necessary to attract private investment, - Nikolay Nikiforov said. The representative of the Ministry of Finance confirmed that the government is interested in attracting private investors to create and develop technoparks.

We need to formulate what is in the concept of business incubation of a federal industrial park, - Nikolay Nikiforov summed up.