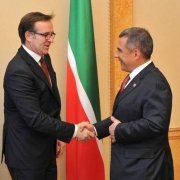 During the meeting with the President of Tatarstan Rustam Minnikhanov the CEO of the European business innovation centers network (EBN), Philip Vanrie, admitted that he and his colleagues were impressed by what they had seen in the Republic of Tatarstan. According to the EBN CEO, he had read a lot about Idea Technopark, but what they saw exceeded expectations. He also said that he was pleased with what he heard at the Association of Innovative Regions of Russia (AIRR) meeting of committees’ chairmen.

According to Philip Vanrie such an organization can significantly contribute to the innovative development of the country. The press service of the Republic of Tatarstan Government reports.

Rustam Minnikhanov also said that the republic is interested in cooperation with the European business innovation centers network (EBN).

Kazan Technopark Idea is Russia's only industrial park, a member of EBN so far. The working group, headed by Philip Vanrie came to Kazan to get acquainted with the work of industrial park, as well as to participate in Kazan Venture Fair.

EBN is engaged in accreditation of innovation and business centers across Europe, providing a unified system of assessment and classification. The network participants are 200 accredited centers of innovation in Europe, but only Idea technopark is presented in the EBN from the Russian part.

III Russian-European Innovation Forum is to establish closer cooperation between European and Russian innovation centers. The Forum will take place in June in the Finnish city of Laapenranta within the 21st annual congress of EBN. The Tatarstan delegation is invited. According to Philip Vanrie, participation in this forum is a great opportunity for Tatarstan to strengthen relations with leading European companies.

We really are in need of the opportunities that you have, - said Minnikhanov. - We are happy to tell you about our potential and about the Association of Innovative Regions of Russia.

European Technoparks network is added by the Novosibirsk Academy park.

Minnikhanov elected as the AIRR Board Chairman

The Head of Tatarstan reports to the RF President