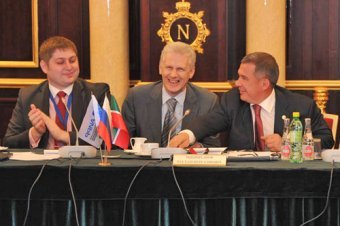 The first Association of Innovative Regions of Russia Chairmen meeting was held on April 25 in Kazan within the VII Kazan Venture Fair. The meeting was held by Rustam Minnikhanov, Republic of Tatarstan president and chairman of the AIRR Board. The meeting was attended by representatives of all regions – AIRR members, federal departments and agencies, Russian development institutions.

In his opening remarks the President of Tatarstan said that during the first meeting of the AIRR committee chairs participants to take stock of the committees, define tasks and work schedule in 2012.

Rustam Minnikhanov thanked all participants for participating in the VII Kazan Venture Fair, and expressed confidence that the exposure of the association will raise the interest of forum participants.

Resuming the work of association committees, the Republic of Tatarstan President emphasized that the objectives of each committee should be directed to the dynamic development of the entire association, and it would be logical to introduce a single assessment system for these tasks. According to Rustam Minnikhanov, it is necessary to form a list of the main criteria to be met by an innovative region in the near future.

Tatarstan President also emphasized the need to establish cooperative ties with the current Association of Russian and International Development institutions - Vnesheconombank, RUSNANO, Skolkovo, the Russian Venture Company, the Fund for promotion of small enterprises in scientific-technical sphere and the others that will become reliable strategic partners of the association.

AIRR activities, according to Rustam Minnikhanov, should be built at the junction of interest in securing government contracts of ministries, state corporations and institutions of regional innovation development.

The Association mission is to establish an effective information exchange and ensure proper distribution of tasks in the chain of the research organization to enterprises finished products located in our region - Rustam Minnikhanov says.

An important tool for the development of AIRR, according to the President of Tatarstan, may become an establishment of a fund grant to support research centers and companies that conduct research on ensuring national security issues.

Along with the technological and financial aspects, according to the head of the Republic of Tatarstan, special attention should be paid to the development of human resources. An important tool for this work should be the spread of state and private partnership to establish close cooperation between government, business, professional education and science.

AIRR balance of work was reported by Ivan Bortnik, executive director of the Association. Presentations were made by AIRR committee

During the meeting, Rustam Minnikhanov suggested to hold weekly committee meetings by videoconference. R. Minnikhanov is ready to hold such video conferencing once a month. Face to face meeting of regions representatives and AIRR members planned to be organized at least once a quarter. Just a regular and systematic work can bring results - the President of Tatarstan said.

Minnikhanov elected as the AIRR Board Chairman

The results of the VII Kazan Venture Fair