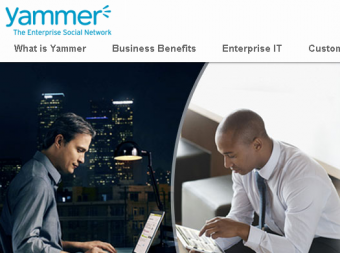 The largest software developer Microsoft is negotiating to buy the operator of corporate social networks - Yammer Company for more than $1B, Bloomberg reported citing sources familiar with the negotiations.

Officials from Microsoft and Yammer declined to comment, but sources say that the agreement between the companies could be reached as early as this Friday. The buying of Yammer allows Microsoft to extend the capabilities of its business applications with tools to expand internal corporate social networks.

The fact of the negotiations regardless of Bloomberg was also announced by Business Insider publishers citing reliable sources.

Closed social network Yammer was launched in 2008. The participation in the network can be both free and paid - prices range from $ 5 to $ 15 per month per account, the cost for groups is $ 79 per month. As of September 2010, the service was used by more than 3 million people and 80 thousand companies from around the world, 80% of them were part of the Fortune 500 (includes the 500 largest U.S. companies). In total, Yammer Company received more than $ 140 M in venture financing.

The deal could increase competition between Microsoft and developers of business-oriented systems Oracle and Salesforce that recently acquired similar assets, Bloomberg agency adds.