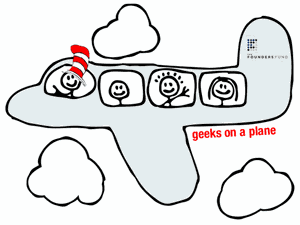 Glavstart jointly with Geeks on a Plane will conduct a mentoring session in Moscow for Russian Internet startups on September 21 and 23. The authors will present their projects to representatives of the world's largest foundations and companies, including 500 Startups, LivingSocial, General Electric, eBay, European Bank for Reconstruction & Development and many others.

Geeks on a Plane is a tour of investors and corporate executives to the countries with fast-growing and emerging markets which was created by a cult investor Dave McClure (500 Startups). Russia is among such countries for the first time. Arkady Moreinis says that the idea was born in the spring, when McClure and he viewed young Turkish companies in Istanbul. The main task, he says, to take local startups to the world stage, to give them the opportunity to compare themselves with Western startups.

A landing of well-known investors proves that they are interested in Russian start-ups, and the fact that angels plot our country on their maps will depend on how our start-ups show themselves, in particular, at the September event. Arkady Moreinis indirectly confirms it, noting that if everything goes properly, the project could have very positive results.

A little bit about the event itself. Applications will be accepted until September, 18 (prerequisite - a working prototype and knowledge of the English language). Global investors will select 15 most impressive projects, will also designate 2-3 geek investors as mentors to work with the teams and take the projects to the global level.

All teams of projects will talk to all geeks and share the results of their work on September, 23. A project that can show the most impressive results will be supported by Dave McClure and 500 Startups.