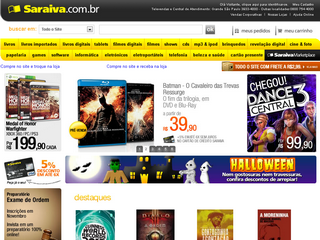 Amazon could strengthen its position in one of the fastest growing markets with this acquisition, because Saraiva SA Livreiros Editores has not only the largest online store of books, but its own network of shops. In addition, Brazil's economy is the largest in Latin America, and the Brazilian market, according to experts, is characterized by high rates of growth in sales of digital books - and this fact is very important to Amazon, the creator of Kindle reader.

Brazilian press reported in August about the negotiations with Amazon, but Saraiva was just one of Amazon’s goals in the Brazilian market at that time.

According to analyst firm E-bit, Brazilian market of online sales grew by 20% to 22.5BRL in 2011, while the growth in the first half of this year totaled 21%. Saraiva company showed a net profit of 341.6M BRL, which is 4.4% more than in the same period of the last year.

The rating of largest online retailers in Runet

OAO Severstal has acquired a stake in Brazilian SPG Mineracao

OAO Severstal has acquired a stake in Brazilian SPG Mineracao