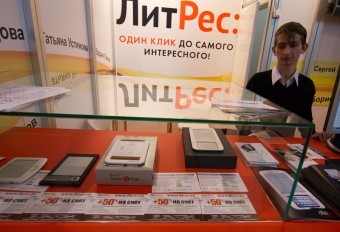 The Fund “Russian Internet Technology Fund” (RITF) invested $5M in Russian store of electronic books “Litres”, as informed the organizer of such investments attraction, the Fund “Black River Ventures” (BRV). Received money will be spent on company’s services development, marketing and promotion, new projects realization, directed on increase of books availability for consumers, convenience of choice and books reading. Representatives of the company “Litres” note, that maintenance of high sales growth rates nowadays is very actual in connection with entering the Russian market such giants of electronic books trading, as “Amazon”.

Making comments about the deal, the director general of the “Litres” Sergey Anuriev stated: “For our company this is the first experience of attracting funds from independent investor. It was important for us to conduct this deal in order to get confirmation of our assurance in market perspectives of Russian-language electronic book, and of the value of those results, which achieved our team during the last three years. After the Investment Fund enters our shareholders team, standards of the company’s corporate management will be increased, that surely will influence its cost growth”.

The “Litres” store was founded in 2006. The store’s assortment calculates more that 380.000 electronic and audio books on Russian and foreign languages. The company has agreements with a range of the largest publishing houses in Russia, and direct contracts with many authors. Yhe Company “Litres” distributes electronic and audio books via its site, applications “Read!” and “Listen!” for platforms iOS, WindowsPhone8, Windows 8 and Smart TV, and also via partners’ network. During the last three years electronic and audio books’ sales of “Litres” increased more than 10 times, and only for the first half year of 2013 the amount of business increased 98.9%, as compared to analogues period of the last year.

Managing partner from “Black River Ventures” Yevgeny Kaltashev noted: “Development of Russian Internet-sector is behind the online-business in Europe and USA for 3-5 years, which gives the opportunity of attractive investing possibilities for taking part in approach of Russian Internet-business with West analogues, and repeat of reliable business-models. The company “Litres” presents the great example of actively developed Russian Internet-company, possessing all elements for successful development, including the team of professionals, and the product, which are in demand by a wide audience of active users”.

The Fund RITF, with amount of $50M was founded specially for financing Internet- and IT-companies at the stage of active growth. Yevgeny Kaltachev said that in the near future the Fund intends to invest in five-six projects, herewith the target portfolio is 12-15 projects, in each of them the Fund will get the minority pack of shares for $1-5M. “Minimum target profitability, at which we count for – three times for invested capital”, - notes Mr.Kaltashev.