Fast Internet from Google in Kansas promotes the development of startups 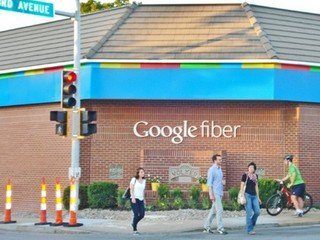 Ultra-fast gigabit Internet Google Fiber started in the U.S. city of Kansas (Kansas). The largest Internet search engine offered the connection speed of 1 Gb/s for just $70 a month, which is much cheaper and faster than most offers of the U.S. internet providers.

As reported by the first users of the service, the speed is staggering: the connection through Ethernet cable is 600-700 MB/s, Wi-Fi - about 200 MB/sec. This speed makes it possible to download a full distribution kit of Ubuntu OS of almost 800 MB in just a couple of minutes.

Interestingly, that the launch of Google Fiber has pushed the development of a start-up movement in the state - Kansas residents are already thinking about how to use the technological edge of the city. For example: a nonprofit project called Homes for hackers has been already started - Ben Barrett allows PC enthusiasts to live in his house and use the Internet for three months with no charge. Ben and his wife hope to create some semblance of Silicon Valley in Kansas.

Another interesting trend is the development of start-ups in Kansas that originally designed for massive traffic. Threedee company relocated from Boston to Kansas City to begin work on a web-based interface for remote three-dimensional printing that makes it possible to handle 3D-models in the browser without exporting to third-party programs.

Google makes the largest purchase in the Ukrainian Internet market