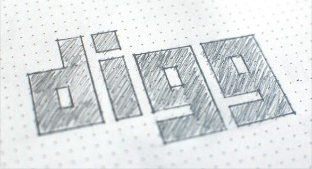 A couple of weeks ago we wrote that Betaworks acquires Digg social network. The new owners then reported on plans to integrate Digg with their own News.me Internet service, and present changes at the site are called part of the general strategy to update Digg.

Existing Digg infrastructure was launched in 2004 and at modern computing facilities, we could place 15 to 18 times more services and information - John Borthwick, Betaworks CEO, says. - When we reached an agreement with Digg and decided that it is necessary to take further steps, we immediately set up a development team and decided to radically restructure everything.

But to make social network re-engineering was still not so easy, Borthwick says, it required a lot of coffee and the work done.

Despite the fact that Digg v1 is already operating and is open to users, Jack Levin, senior manager, says that it is a beta version so far, and there are some limitations in the service operation. Digg v1 has an updated design, improved integration with Twitter and Facebook, but users’ Comments are not yet available - undertime did not allow the developers to implement the updated version of Comments.

In addition, the new project managers launched RethingDigg.com resource, where different ideas, advice and recommendations of users about how to improve the resource are accepted. As Borthwick reported, over 3,700 comments from users were received during a week.

Recall that the idea of Digg project launched in 2004 was to allow users to share all of the most interesting on the Internet with each other. Since its foundation the project has attracted around $ 45 M from investors, and even received an offer from Google - the corporation wanted to purchase the service for $ 200 M, but the deal didn’t take place, and later the resource popularity started to fall dramatically. The new owners of the service are not going to bury Digg, Betaworks has plans for further resource development, and the current changes are the first evidence of this.