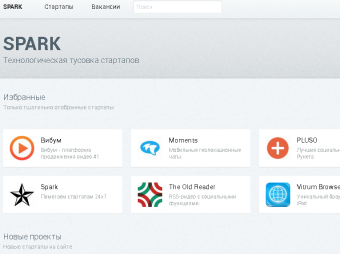 Founder of blog “Zukerberg pozvonit” Andrey Zagoruiko (known in Internet as Sasha Peganov) launched Internet service “Spark” for Startups and investors.
Internet resource “Spark” was created by analogy with popular American field AngelList for search of investments and crowdfunding. Among differences of its project from AngelList Zagoruiko notes absence of necessary accreditation of investments for entering the site, and more opportunities for content distribution and social activity, publishes RIA Novosti.

The reason for creation of Russian service, Zagoruiko names increasing flow of messages about new projects. In conditions of much quantity of information, which Startupers wanted to discuss or report about them in Internet, the team of “Zukerberg pozvonit” decided to create a social service for them.

Startups are offered to create an account for its own project. On a Startup page it is possible to add not obly its description, but several vacancies, team members, references in press and other. The portal founders will choose the most interesting posts of users and make a cross-promo on “Zukerberg pozvonit”. Thus, there will take place the exchange of audience with popular blog.

According to a founder, there will be no commercial services and advertisement on the service, but after some time there will obviously appear monetization. The service is also available in mobile version.

Investments in the site of educational content “BeSmart” comprise $4M