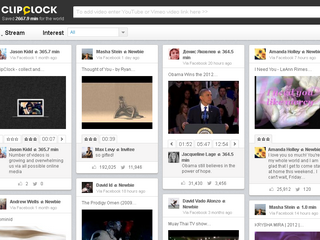 Venture fund Runa Capital has supported Russian project ClipClock, which is a close analogue of the popular image-sharing service Pinterest. ClipClock is designed for the exchange of videos that can be posted online using your Facebook, Twitter and Google+ account or a special application for the iPhone.

Another advantage of the service is the ability to search for fragments within the video. It allows you to share only chosen moments. The $2,5M investment from Runa will be spent on the attraction of audiences, building a partner network, the development and promotion of mobile services, the founder of ClipClock and the former director of broadband Internet access Department of VimpelCom Alex Krainov says. It is also planned to develop the business in the U.S. market, which is the main one for the service: about 70% of the project’s audience is from America, 25% - from Europe, and only 5% accounts for other countries, including Russia.

This is not the first investment in ClipClock: the service received $200K from Igor Ustinov and Marina Ravun, the founders of Buka Company, as well as a $50K grant from Microsoft Seed Fund.

ClipClock was officially launched on October 2, 2012 after a two-month beta period. Today's traffic of the service has not been disclosed, but according to its director, the company is gaining the audience at the moment. The monetization of the service will be done in two ways: targeted advertising and the creation of paid premium channels for its users. ClipClock uses the power of social networks for building a new level of social video, - Gaidar Magdanurov says about the service.

Currently the service is available only in English. Spanish will be considered as the additional language. The team does not exclude Russian localization.