An expert project of Hi-Tech Mail.Ru and IDC Company conducted a study of the smartphone market on the eve of the next Android OS version announcement. According to the study, the share of Android devices in Russian deliveries has increased from 39.7% to 70.9% for the year.

According to our study, over 50% of Russian buyers prefer Android smartphones. The share of deliveries in the first quarter reached a record-high 70.9% due to lower prices that suggests the dominance of the system, - Dmitry Ryabinin says, the chief analyst of Hi-Tech Mail.Ru. - Main expectations from new versions of Android are related to the optimization of its energy consumption. If the OS autonomy is improved, its popularity will continue to grow. Android has no serious competitors so far. 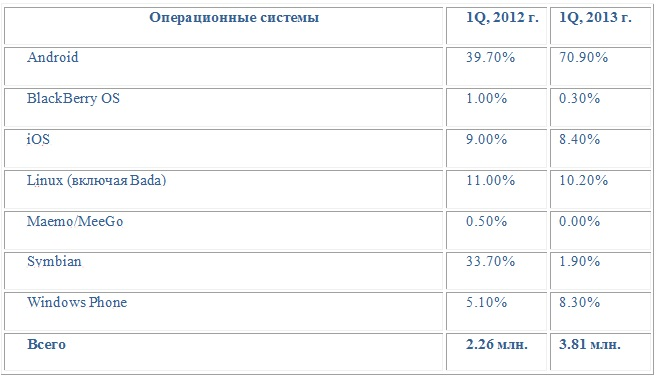 In addition, at today’s opening of annual developer conference Google I / O in San Francisco, the head of Android and Chrome platforms development Sundar Pichai said that the total number of activated mobile devices running Google Android has exceeded 900M worldwide. The main competitor of Google - Apple Company - ceased to provide official data on the number of activated iOS devices.

Russian companies have overestimated their level of innovation