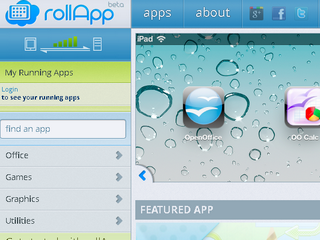 Founded in December 2010, rollApp develops the universal platform of online application imaging. It allows users to work with any previously created programs on any new devices, for example, with Windows programs on iPad; with iOs applications on Android devices; with MacOS programs on Windows PC, etc.

RollApp team is small in number, but includes the best experts from all over the world, such as Bjarne Stroustrup (developer of the C++ programming language) and Bob Iannucci (former engineering director and senior vice-president of NOKIA). RollApp headquarters is located in Silicon Valley, its engineering center – in Dnepropetrovsk.
In practice, rollApp offers the possibility of remote launch for traditional “desktop” cloud-based applications, giving a user no illusion of working with local programs. RollApp is also integrated in popular data storage services, such as Dropbox, Box (former Box.Net) and Google Drivе - it allows users to work easily from rollApp applications with their own files. It considerably expands opportunities of working with applications and files for Chromebook users and those, who use Google Chrome browser.
“For the time we only develop our infrastructure, and today our users are serviced by servers, which are located in USA and Germany, - says Vlad Pavlov, founder and CEO of rollApp. – It means that in other countries our service functions a bit slower. Despite this, Russia makes the top three countries sending us the best traffic, and in the near future we plan to establish our servers in Russian Federation too”.
Earlier TMT Investments has already invested $350K in rollApp.

A developer of mobile applications from Skolkovo in Silicon Valley

The popularity of mobile augmented reality applications will grow