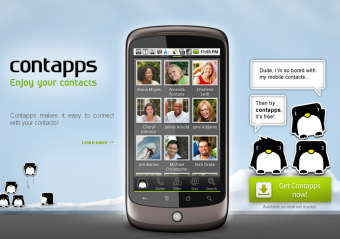 Company Gentoo, the developer of universal mobile application Contapps, which allows users to manage their contacts synchronizing the information from multiple accounts such as Linkedin, Facebook, Twitter and Google+, has conducted seed round of financing totaling $1M, $250K of which was invested by TMT Investments.

Investment company TMT Investments, specializing in investments in telecommunication and technology companies, has acquired 671.194 preferred shares in the capital of Gentoo; the share of TMT in the company is 6.25%.

Contapps simplifies communication and organization of contacts, offering contact-oriented platform that automatically aggregates all available data relating to each individual in one place. The application was downloaded by more than a million users of Android devices. The developers will provide the version for IPhone users in the near future, which will greatly expand the company's share in mobile internet.

According to the Executive Director of TMT Investments PLC Alexander Selegenev, Gentoo currently offers one of the best mobile contact managers for Android, and the developer plans to launch applications for other mobile platforms.

Artem Inyutin, the chief investment officer of TMT Investments says that Gentoo Company has a million users of Contapps application. We believe that the explosive growth of the audience will continue, especially with the launch of iOS version of the application.