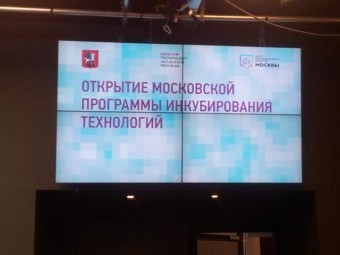 Expert advisory body of Moscow technologies incubation program has chosen 11 partners for participating in the program. The partners became the most successful business incubators, accelerators, Russian and international investment companies. All in all there have been filed 18 applications on participation in Moscow technologies incubation program (MTIP).

The stated above partners gained the right of free disposal of their Startup-projects on a field-accelerator API Moscow. In the course of acceleration session innovation Startups can get on the field Consultancy and expert Support, take part in educational programs, will have an opportunity to make contacts with industry leaders, private and venture investors, mentors, business angels. The companies will also be provided with a set of centralized services (post, copying-duplicating, courier, secretary) on API Moscow.

Their Startup projects will get an opportunity to participate in educational and mentor sessions on API Moscow.

At the end of July the selected partners will start working with their Startups on the field. Oriented period of work of acceleration session is 3-6 months. The first results of program realization and names of the first accelerate program graduates will become known by the end of 2013.

According to director general of Moscow Innovation Development Center Konstantin Fokin, launch and realization of Moscow technologies incubation program is the most important event in infrastructure development of the city. “The program offers a great opportunity for future graduates, who start innovation enterprises, to make a claim about themselves not only on Russian market, but also on International markets. We intend to widen the program of technologies incubation in future. I believe that API Moscow will become the only one field of hi-tech Startups acceleration in Moscow”, - added Mr.Fokin.

Moscow technologies incubation program has been developed by the decision of Moscow mayor Sergey Sobyanin following the results of meeting with leaders of IT and innovation business on January, 28 2013. The program is being realized by Innovation Development Center with the support of Moscow Department of science, industrial policy, and entrepreneurism, and focused on creation of innovation sphere and innovation companies` support on early stages in Moscow, and on a significant increase of projects amount, which are of interest for venture investors. API Moscow is the first unique specialized world-class field, which is fully equipped and arranged for realization of sessions with Startups within the limits of Moscow technologies incubation program; It will be opened on the territory of former confectionery factory “Krasny Oktyabr” at the end of July 2013.

IDC presents its program to VCs

Contest-accelerator (BIT) received a record number of applications in 2013