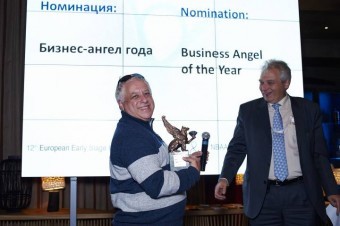 Yesterday in Moscow within the limits of the Second Russian Week for business angels has been awarded the Third Annual award of National Business Angels Association (NBAA). Awards have received private bodies and organizations, which in 2012-2013 contributed significantly in development of Russian market of venture investments at early stage.

The awarding ceremony during the solemn dinner for delegates and partners of the Winter University and Congress NBAA. The RVC is the general partner of the Business Angel Weeks, and a partner of nomination “Business angel of the year” of Annual Award NBAA. The director general RVC Igor Rubenovich Agamirzyan has awarded the founder pf the Fund Altair Capital Management Igor Ryabenky.

Igor Ryabenky is well-known in Ru.net as a serial entrepreneur and angel-investor. Altair Capital Management works with Web-Startups at early and Seed stages. Among projects, which received starting investments from Altair, there are such famous services, as Quoteroller and favorite by everybody LinguaLeo, who is the winner of the contest BIT-2011. The later investment from the Altair Capital has been made in the beginning of September, 2013 in the service of mobile visual shopping Goodwin.