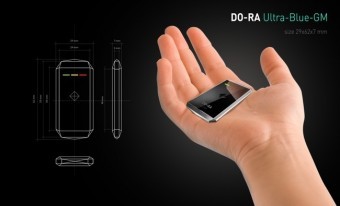 In October 10, 2013 the “Skolkovo” Fund has taken decision about the grant in amount of 22.5M RUB giving to “Intersoft Eurasia”, OJSC, operator and developer of the project DO-RA, company-participant of “Skolkovo”. Investments will be directed on creation of a prototype of wide-range cross-platform device DO-RA of household purpose with function of radiometer.

The company “Intersoft Eurasia” has been founded in March, 2011 for development of innovation products for smartphones and, in particular, a portative device DO-RA with function of radiometer. In October, 2011 the company became the resident of the Nuclear Technologies Cluster of the Fund “Skolkovo”, and in December the project DO-RA received a mini grant of the Fund in amount of 1.35M RUB.

According to executive director of the Nuclear Technologies Cluster Igor Karavaev, with the assumption that radiation technologies often are used in industrial applications b2b, DO-RA is a bright example of a product development for the widest consumers round.

From the moment of the project DO-RA launch, there has been developed a line of devices for various smartphones modifications, engineering documentation for industrial production DO-RA based on Geiger-Muller counter (GM) in European Standard IPC. Besides, there has been developed a series of mobile applications DO-RA.Soft-GM with user interface on 23 languages for mobile platforms: iOS, Android, WP7, JavaME, BlackBerry, Symbian, Bada, and under OS: Windows/Linux/MacOS. All applications DO-RA.Soft are available for free download in corresponding Internet stores.

At the moment the company entered a stage of active development and search of partners-investors for manufacturing organizing and international device distribution.

“The main intellectual capital of the project DO-RA, - noted Vladimir Yelin, inventor and founder of “Intersoft Eurasia”, - is a series of unique developments for smartphones, created by the project’s team, including unique technical solutions of ionization radiation compact indicators, reading electronics and digital data transfer on smartphones, computers”.

The Skolkovo Fund announces the start of applications filing for Technostart