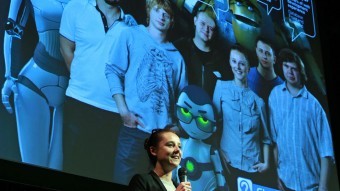 Game Startup for programmers CheckiO in the near future plans to close its first investment round, investors of which will become the Fund “TA Venture”, the Fund “Vegas Tech Fund” by Tony Hsieh, business angels Jay Betson (founder of the platform of free software СЕО Acquia/Drupal) and Bob Mason (CTO and founder of online-videoplatform for travelers Brightcove), and also other investors. According to angel.co information, investment sum comprised $750K.

Liza Avramenko, CEO of the project, notes that “TA Venture” became not only the investor for “CheckiO”, but also a strategic partner. The project has been called to help people in opening up programming science via the game and competition inside friendly society. Of course, the team of the project would like to see in monthly TOPs Ukrainian players.

In “TA Venture” paid attention to “CheckiO” las year at the conference IDCEE, says Viktoria Tigipko, managing director of the Fund: “We very much liked the mission of “CheckiO” to become the IT Olympics. We are very interested in qualification rising of developers in particular, and computer qualification on the whole. Thus, recently we have launched in Ukraine the volunteer project “Code Club” for children study of coordination, which has been created in Great Britain. The “CheckiO” also offers a very original method of studying and improving skills of the code writing”.

The project “CheckiO” has been founded by Aleksander Kyabakh in October last year. This is a game, in which in order to pass the mission and enter the next level, it is necessary to write a program code. Developers all over the world can compete in beauty and quality of its code. Nowadays more than 25 thousand users have registered in the project, among which Ukrainians take the third place. There has been offered more than 45 thousand program solutions for game tasks and puzzles. The main version supposes use of programming language Python, gets ready a version on javascript and on other languages.

Vegas Tech Fund invests in the Ukrainian Startup for programmers