The Moscow Government and the Microsoft combine efforts for Startups' support 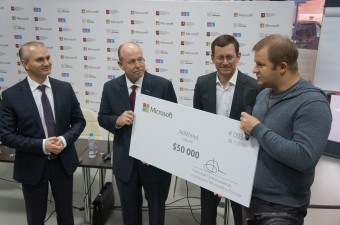 The company “Microsoft” became the first partner of the Moscow program for technologies incubation among the global IT-companies. The “Microsoft” will present to resident of the Startup-accelerator API Moscow access to leading technologies, international expertise and innovations. During the execution of the corresponding agreement on cooperation, 4 Startups have been named, receiving grants from the Seed Investment Fund “Microsoft”.

Within the agreement, the “Microsoft” opens the point of existence of the Seed Investment Fund at the first in Russia acceleration field of international class API Moscow, assisting its residents in filing applications for the grant receiving from the Fund, and those companies, which have already received grants “Microsoft” – employing services of the accelerator API Moscow. Besides, residents of the API Moscow will have a rare opportunity to get unique knowledge: leading experts of “Microsoft Ventures” and “Microsoft” in Russia will cinduct a series of educational events.

The executed agreement expects conduction of the complex of joint events API Moscow and Microsoft, in particular:
• Consultations on the subject of investments attraction with representatives of the Seed Investment Fund “Microsoft” for residents of the accelerator;
• Opportunities for additional education and consultation support from the side of Russian and International experts;
• Work on increase of commercial attractiveness of young entrepreneurs’ projects, its presentation to investors and help in entering projects on Russian and International markets;
• Access to leading technologies within the program “BizSpark”.

According to the main operational director of the corporation “Microsoft” Kevin Turner: “This year the “BizSpark” celebrates the fifth-year of successful activity in Russia. Nowadays more than 50 thousand companies from more than 100 countries, including 3,727 from Russia, joined the program”.

During the ceremony of the agreement execution have been named 4 Startups, which received grants of the Seed Investment Fund “Microsoft”, two of them are residents of the API Moscow:
• AdWired (the project AdWired DMP), resident of the API Moscow. Moscow. Amount of the grant - $50K. AdWired – is the mobile advertising platform, consisting of dynamically growing advertisement network and developing DMP. DMP (data management platform) is the company’s product in the sphere of Dig Data, which constructs random portfolio for users.
• Minuta, resident of the API Moscow. Orel. The amount of the grant is $30K. The company develops service and applications, which allow people without technical knowledge in the sphere of video-tape editing creating in the cloud of its own photos nice subject video/slide show and easily sharing it with friends. The grant has been given for creation of mobile international service version, which at the moment is presented only in social networks, and also with the help of grants is planned to execute testing of a hypothesis of users’ behavior in this perspective market.
• WinkCam. Novosibirsk. The amount of the grant is $30K. WinkCam is a technology of movements’ recognition for mobile and portable devices. Stability to false activation and low energy consumption allows using recognition constantly in the mode of a service, even in terms of passive and standby mode.
• Kid Erudite. Moscow. The amount of the grant is $30K. The company develops complex program of education and development for children aged 2-7 for mobile devices on platforms Windows Phone, iOS, Android. The program represents a set of mobile applications, requiring separate kids developments spheres (for example, development of imagination, fine motor skills, color perception, etc.).

Thus, during the activity of the Fund 35 Russian Startups have already received grants on the total amount of $1,360M.

We intend to continue supporting small and medium business, creating all new opportunities for development of staff potential and national technologies. I consider that with the help of such initiatives we contribute in the IT-branch development and innovation economics, - noted Nikolay Pryanishnikov, president of the “Microsoft” in Russia. – “Microsoft” helps developers to create and realize their ideas and differentiate itself in conditions of competitiveness. Engineering tools of the “Microsoft”, provided within the “BizSpark” program, allow developers creating high-technology software easily and effectively. More over, we render Startups financial support – 35 starting companies have already received grant on amount of $1,360M. In partnership with the Moscow Government we aim at new horizons”.

Microsoft invested into 3 startups $ 70-80 thousand each.