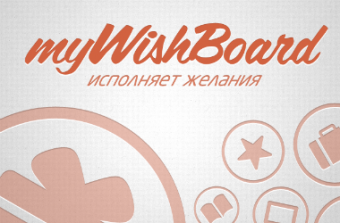 The venture Fund “Life.Sreda” invested $730K in the service of joint wishes coming true and goals achieving “myWishBoard.com”. Received money will be directed to functions development, adaptation for Android and iOS, ans also active promotion due to evens.

MyWishBoard – is the p2p-platform, where users can gather money for their wishes coming true with the help of friends. All volunteers can give money to a friend for his wish, and when the required sum of money will be gathered, it will be transferred to electronic account of a user.

According to Aleksander Ivanov, financial director of the “Life.Sreda”, the fund decided to consider how people use financial services via light implementation.

“At first the service helps people formalizing their wishes, and then gradually makes them placing targets and them collecting at it, - says Mr.Ivanov. – Initially we personally inspired with experience of the “Smartyping”, but people make it own way. It looks like standard wishlists, but this is for social interaction, further logics will be more sophisticated. As you understand, the project should be special in order we after American deals could make Russian investment. A good perspective idea, good IU, viral potential and there are no such heavy infrastructure and integration with banks as other fintech-projects have, thisi s why it is much easier for them enter the foreign markets, at with I make a great stake in case of the “myWishBoard”.

The “MyWishBoard” started to work in Jujy, 2013, During this time the service gathered more than 500 thousand users’ wishes, and almost 21 thousands of them has been financed. The average amount per one wish comprised 4K RUB. The turnout of the project during October comprised 1M RUB.