Novosibirsk startups about the work of business incubators in Boston 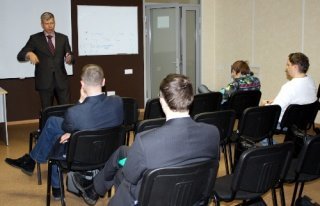 The meeting with Pavel Savin, the Epitek representative, took place on March 21 at Academpark, the Academpark website reports. He spoke about the work of American business incubators and the experience of a two-week StartUpAccess training program in Boston. The graduates of the Winter School and the heads of start-up projects participated in the event.

Epitek, the Academpark business incubator residents, together with eight more Russian start-ups with the support of Russian Venture Company were trained in Boston under StartUpAccess educational project in February. During the training, the young innovators met with successful foreign entrepreneurs, established contacts with world-renowned research centers, as well as took part in trainings and courses of foreign businessmen and investors. In addition, they had an opportunity to discuss their projects with industry experts, and to negotiate on future cooperation in business development and attracting investment.

At the meeting, Pavel Savin shared his own impressions from visiting Massachusetts Institute of Technology (MIT) and the internship in general. He also spoke about the peculiarities of working with startups in the USA: The main difference between American business incubators and the Russian ones is that there it works as a private commercial project. They are done by people who like to find a design and make them candy. They have more than one successful team. There's a constant heavy action a lot of startupers who know how to promote their development and have learned to do it.

Anyone who feels ready for the rapid development of the project, believes that it is interesting for the American market, I recommend trying themselves at this contest, - suggested Pavel at the end of the meeting.

Academpark residents to receive up to 6M RUR for business development