Chubais: Companies going to IPOboard to get compensation 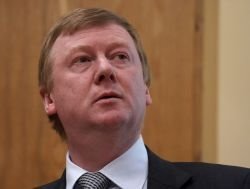 Opening of Russia's first web-site for attracting investment by non-public innovative companies – IPOboard (MII-board) took place on April 16 in Moscow. Attending the event Anatoly Chubais, the RUSNANO JSC Board Chairman, expressed the view that companies from the Russian regions entering the IPOboard, should receive compensation from the federal budget, analogous to the companies going to the MII MICEX.

In addition, according to Chubais, the companies going to the IPOboard are to be supported by the same (financial) federal mechanism.

IPOboard (MII-Board) is a segment of the Market for Innovations and Investments (MII), a joint project of the MICEX-RTS and RUSNANO.

Currently, the regional innovative companies coming on the MII platform (market innovation and investment) MICEX-RTS in 2011 and subsequent years may receive a 50% compensation for all types of expenses on placement preparation but not more than 5 M RUR.

The companies can put a share of 5-10% at IPOboard and attract up to $ 2-3 M. Information board will represent an open Internet resource for transactions between startups and investors. The main task of the board, according to IPOBOARD curator Svyatoslav Sedov, will be increasing the openness of companies in the venture capital market, so a website and published materials about the company are required. In order to bargain on the board, several conditions are to be followed: to be a company no longer than 3-4 years and have capitalization of not more than $ 20 M.

The possibility of trading both in negotiated deals mode, and in the mode of auction is realized on the site. In the near future it is planned to provide accounts on the transactions carried out in the MII-board on the basis of the MICEX-RTS Group's infrastructure.