PwC to attract investors in the Southern Urals 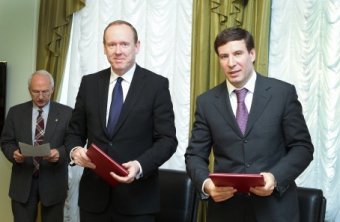 The Chelyabinsk region and a large international consulting company PricewaterhouseCoopers signed a cooperation agreement to enhance the investment attractiveness of the region, the press service of the region head reports. According to the governor, Mikhail Yurevich, the regional government accounts for the company's reputation potential in the selection of strategic investors.

PricewaterhouseCoopers is the largest international companies network. It provides services in consulting and auditing for steel, machine building, energy and other companies. It exists over 160 years and is one of the so-called profile Big Four companies. Opening the meeting, Mikhail Yurevich said that the company now has hundreds of successful organizations in almost all countries of the world.

David Gray says that the agreement covers many areas of cooperation, but its main goal is to increase the investment attractiveness of the region. We are working around the world, and our task is to show the potential investors attractive parts of the Chelyabinsk region, to give an understanding of where to invest money - says David Gray. - I think Russia is very attractive for investment, but in a global sense, it is necessary for the investors to get rid of stereotypes and misconceptions, dictated by the past. There is a favorable tax regime, the educated people in your country. The totality of all these benefits is to be explained to people.

In conversation with journalists after the meeting the head of PriceWaterhouseCoopers in Russia supported the opinion of the Chelyabinsk region Governor on the semiotics of the company appearing in the Southern Urals. Your area is very attractive for investment, we will work both on their attracting as well as helping local companies successfully operate in the domestic and international markets.

RVC Infrafund has signed an agreement with Bashkortostan Ministry of Economy