The first Skolkovo building opens its doors for startups this summer 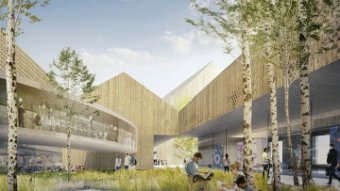 The construction of the first Skolkovo innovation center building should be completed this summer. It was announced by Viktor Vekselberg, Skolkovo president, at a board of trustees meeting. Dmitry Medvedev asked to locate all innovators there, not just the bureaucrats.

It will be the first highest category of green Standard building - the Found President says - it will integrate all the elements that are in other objects. It will house start-ups and some administration.

Vekselberg added that the general plan of the Skolkovo innovation center is fully developed and approved. The construction of engineering infrastructure has begun. He voiced the hope that the builders will build according to schedule.

Attending the event, Anton Yakovenko, the representative of the Skolkovo urban block said that they plan to complete the construction of the first innovative city object in August.

The area of the innovation city is 389 hectares and the total area of real estate of the city is 1.3 M square meters. In particular, he said, 100 K square meters is allocated to the data center to be established by the Sberbank in collaboration with Skolkovo.

Yakovenko pointed that the construction of the city meets all environmental requirements. In particular, fertile soil is topped off in advance, and will be used in landscape works.