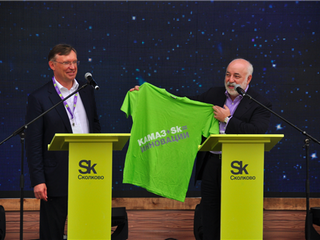 The Skolkovo Fund president Viktor Vekselberg and the General Director of KAMAZ OJSC Sergey Kogogin signed a supplementary agreement on the establishment of a R&D Center of JSC KAMAZ in Skolkovo innovation city. The ceremony took place in the framework of the first international conference of startups and investors Startup Village.

The document specifies research areas of KAMAZ R&D Center, which are energy-efficient vehicles for linehaul, urban and all-wheel drive transportations, and IT in the vehicle control.

Under the agreement, KAMAZ OJSC will have a building area of 12K square meters for offices, laboratories and design offices in Skolkovo. In addition, KAMAZ plans to regularly review profile projects of Skolkovo residents to assess the prospects for the implementation of developments, acquisition of shares in these companies, and co-investment in research activities.

In turn, the Skolkovo Fund will develop and offer a mechanism and procedure for the R&D Center staff to access highly developed scientific and social infrastructure of the Innograd on terms acceptable to KAMAZ OJSC.

It is planned that the construction of KAMAZ R&D Center will start in the second quarter of 2014 and complete by January 2016.

One of the key tasks we implement in creating Skolkovo ecosystem is the involvement of major global corporations. Today the Skolkovo Fund has signed an agreement with KAMAZ, one of the leaders in the automotive industry. KAMAZ, undoubtedly, is the corporation, which should be the main consumer of our innovators’ products, - the president of Skolkovo Viktor Vekselberg said.

We pay great attention to the innovative development of the product. As of today, KAMAZ has one of the most advanced scientific and research platforms in the industry. However, we are constantly looking for ways of further scientific research development, and the Skolkovo Fund is a platform for various research areas and intellectual resources which allows to achieve significant synergistic effect, - the General Director of KAMAZ OJSC Sergey Kogogin says.

KamAZ truck maker to build its own RandD Center in Russia?s Skolkovo

KAMAZ will spend 1.3 B RUR within four years in Skolkovo