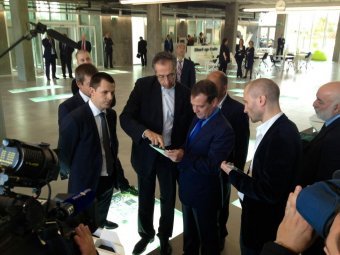 Yesterday, Russian Prime Minister and the head of the Board of Trustees of the Fund Skolkovo Dmitry Medvedev held a meeting of the Presidential Council for economic modernization and innovative development of Russia in the innovation center Skolkovo.

Before the beginning of the Council, the Prime Minister, accompanied by the head of Skolkovo Viktor Vekselberg, saw the new ultramodern building Hypercube, the first built in Innograd, the fund says in its report.

After passing the building, Dmitry Medvedev met with Skolkovo residents who moved in the Hypercube. The Prime Minister also saw the exhibition of companies which are the key partners of Skolkovo, including Cisco, Siemens, IBM, Johnson&Johnson, which had also opened their offices in the Hypercube.

Then Dmitry Medvedev delivered a welcoming speech to the participants of the conference The recipe of success for pharmaceutical companies in Russia (Live), which started its work in the Hypercube on that day. The conference is organized by the Cluster of Biomedical Technologies of the Skolkovo Fund.