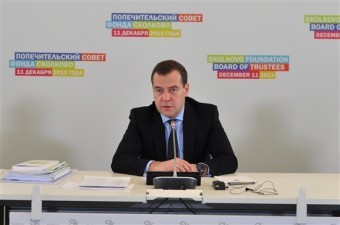 In December, 11 has been conducted the annual meeting of the Supervisory Board of the “Skolkovo” Fund in the building of Hypercube in the Innovation Center “Skolkovo” under control of the Prime-Minister of Russia Dmitry Medvedev. Before start of the meeting Dmitry Medvedev has visited the unique underground electrical substation “Soyuz” and made a tour of the constructed innograd.

The opener of the meeting of the Supervisory Board of the “Skolkovo” Fund, the Chairman of the Government of the Russian Federation Dmitry Medvedev said: “Today we consider the course of the whole idea realization and working results in the outgoing year. On the whole the set task is solved – it has been established a center for technologies commercialization. The “Skolkovo” is already implemented in the global innovation system: executed today agreements with partners is sharp evidence. But the most important thing is that there has been established the developers’ society, which collaborates innovation technologies and achieve commercially important results. The Government is interested in successful development of the project and efficient use of invested money.

The President of the “Skolkovo” Fund Victor Vekselberg continued the meeting with a report about results of the project realization on the innovation center establishment, and also showed main target indexes of the project development. The “Skolkovo” Fund actively participates in creation of favorable ecosystem for development of entrepreneurial activity in Russia. During the whole period of the Fund activity there has been established more than 12 thousand working places, companies-participants have filed more than 450 patent applications, during the conducted year doubled the amount of corporations, which are planning to open in “Skolkovo” their R&D centers. When achieving the main targets of the “Skolkovo” Fund, which have been set by 2020, the integral impact in economy of Russia will comprise more 200B RUB”, - stated the Fund’s President.

The President’s adviser of the “Skolkovo” Fund on work with startups Pekka Viljakajnenhas told about plans for conduction the next “Startup Tour” and International conference “Startup Village – 2014”, which will be conducted in “Skolkovo” in June 2-3, 2014 with the aim of assist in formation of the Russian innovation society and its integration in a global innovation center.

Within the limits of the meeting in the presence of Dmitry Medvedev have been executed two agreements with the key partners of the “Skolkovo” Fund. There has been executed the pack of agreements between the company “Boeing”, the Fund “Skolkovo”, the Group “Industrial investors” and the Group “Tranzas” about establishment of the Aviation education center “Skolkovo” on the territory of innovation center “Skolkovo”. In the center will be executed the research activity, and also preparation and education of engineering-technician personnel with the aim of security increase on air transportation. Opening of the center is planned for 2015.

The “Skolkovo” Fund and the company “Schneider Electric” have executed an agreement on establishment of the Innovation Center “Schneider Electric” on the territory of innograd, where will be developed absolutely new products for managements system of electric energy distribution for power lines. It is planned that the Center will start functioning in 2015, and in 2017 there will work already 100 high-qualified workers, mainly Russian scientists and engineers.

Mr.Medvedev got acquainted with developments of the Fund Skolkovo