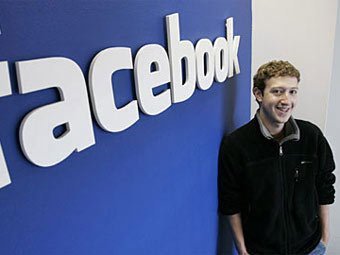 Facebook stock selling on Monday, May 21, began with the failure. The session ended with the decline by 11% compared to the closing price of the previous day. At the same time Mail.ru stocks declined in London. The Yandex cost has demonstrated a morning drop, but during the day the searching system shares were in the black.

The price of shares at the close of the tender on Monday ($ 34.03) was almost 25% lower than the maximum value, which was reached during the day on Friday, adds Reuters. The rate rose up to $ 45 per share on Friday.

The world's largest social network Facebook, founded by Mark Zuckerberg in 2004 at Harvard University, came to the IPO on Friday, May 18.

The shares value at the beginning of the tender was determined by the upper level of $ 38 apiece, and the auction began with a mark of $ 42.05, which was 11% higher than the offer price. Having risen during the tender session up to $ 45, share price by the end of the day dropped at $ 38 and before the completion of the bidding rose to $ 38.23.

Analysts expected the shares to go up by 10-50% during the first day. However, the experts do not consider the result a failure of Facebook. In their view, this suggests that the input range has been calculated correctly by the underwriters.

Falling stock prices reduced the capitalization of Facebook at $ 11 B, analysts say that social network shares selling is very much emotional, Reuters reports. Last weekend, the press generally gave out the first day results as negative, and this has upset investors.

It is noteworthy that with the fall of Facebook shares the Russian Yandex rate has dipped, however, by the end of the day the fall was won back, and the domestic search engine finished the day gaining profit.

Mail.Ru Group shares also collapsed on Monday. The fall comprised 9.1% ($ 33.4 per share). Group shares are listed on the London Stock Exchange. According to Bloomberg, Mail.Ru securities on Monday showed the deepest fall since October 4, 2011.

Facebook Employees will pay $ 1 M taxes after the IPO