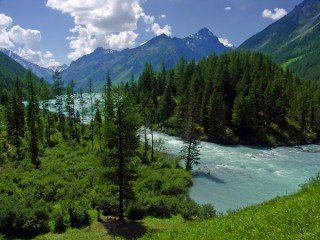 Altai region allocated 45 M RUR for funding the innovation events in 2012. The volume of state support for innovative business has doubled - up to 30 M RUR – 6 M RUR were sent from the regional budget on grants for the start-up companies and subsidizing the technological innovation expenses of operating enterprises. Another 24 M RUR were attracted from the federal budget within the competition of the Russian Ministry of Economic Development and Trade for state small and medium businesses.

This was stated by Mikhail Schetinin, the Deputy Governor, the Head of the Central administration in the economy and investment. Funding will be made within a long-term target program State Support and Development of Small and Medium Enterprises in 2011-2013 in the Altai region.

The state support size for the institutions operating more than a year has increased up to 2 M RUR. The corresponding decree № 298 was signed on June 4 by Alexander Karlin, the Governor of the Altai region. Competitive selection among the regional innovative companies is to be announced in late June - early July of the current year. Innovative clusters will receive 15 M RUR from the budgets of all levels in 2012. The money will be spent on market research, working out the regional clusters development concept, as well as equipping with the research equipment of power engineering (ALTEK) and biopharmaceutical (ABFK) clusters laboratories, the creation of which began in 2011.

Under a long-term target program for 2011-2013 On State Support and Development of Small and Medium Enterprises in the Altai region, 21 grants to newcoming entrepreneurs and subsidies were given out for purchasing equipment, licensing, research and development comprised the total amount of 15 M in 2011. The maximum size of the grant for start-up companies was 0.5 M RUR, and subsides for the operating enterprises – 1 M RUR. 25 M RUR of federal and regional resources were attracted for implementing the projects to support regional clusters in 2011.

Participation in the competition of the Russian Ministry of Economic Development and Trade allowed to acquire modern high-tech laboratory equipment (11 units) for the participants from ABFK and ALTEK, to conduct a number of market research and training seminars, the official website of Altai Territory reports.