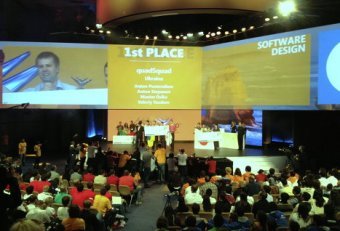 Microsoft Corporation plans to increase by about half – up to $ 300 K – the prize money of one of the world's largest international student innovation competition Imagine Cup, the President of Microsoft Russia Nikolai Pryanishnikov told RIA Novosti.

Microsoft Imagine Cup Finals will be held in the summer of 2013 in Russia for the first time. The conducting of this large-scale competition in St. Petersburg should encourage the development of Russian high-tech startups ecosystem, according to Microsoft representatives.

Winners of the next year finals in St. Petersburg will receive twice as much prize money than here in Sydney, - said Pryanishnikov on the eve of announcing the results of Imagine Cup 2012 competition the final of which takes place in Sydney.

Now the top three of the main competition of software projects gets $25K, $10K, and $5K and these amounts will double next year.

In general, the conduction of the international finals of Imagine Cup costs the corporation millions of dollars every year, a source close to the company told RIA Novosti. A part of tender’s cost is taken by partners, this year it was Coca-Cola Company.

Partners for the next year have not been finally identified, said Pryanishnikov.

In addition to doubling the prize money of Imagine Cup, we have declared a regular program of grant support for start-ups at three million dollars for three years, - said Pryanishnikov.

According to him, it will help many prospective Imagine Cup teams to bring their ideas into practice. Two or four startups will receive grant funding from Microsoft each year under the grant program. This program has been tested by the organizers of the competition in 2011 for the first time.

Next year, a set of Imagine Cup competitions must also be extended with a new contest on innovation.

During the ten-year history of Imagine Cup 1.7 M students from 190 countries took part in the competition. This year's Sydney final involved 106 teams from 75 countries.

Imagine Cup is one of the largest competitions on student innovation, which is organized every year with the support of Microsoft and other companies and nonprofit organizations since 2003. Each year, the competition involves some 350 K young people around the world. Participants must think how information technologies can help to solve complex global problems of today.

The winners of Imagine Cup Russia