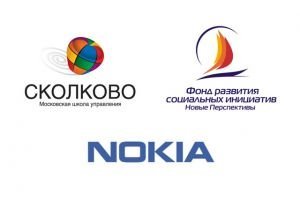 Nokia announced the results of a startups competition of grants for graduates and students of Moscow School of Management SKOLKOVO, which goal was to develop mobile applications aimed at solving social problems. The winners - social Button and Bardakovka projects - received grants totaling 80 K EUR.

The competition was launched in April 2012. The participants were given the task to develop applications for mobile devices on operating systems Windows Phone and Symbian, which could have a positive impact on the social environment and to ensure the most efficient use of grant funds. The term of the project was limited to one year.

The jury received 20 projects by early June. According to the results of the presentations made by the participants of the contest and the final round of consultations with experts, the winners were projects Social Button (provision of mobile medicine services for the optimization of social workers activities and reduction the cost of home visitation services) and service Bardakovka (Rapid Response Mechanism of urban performance problem to help people in solving these problems.)

Representatives of the jury appreciated the projects submitted for the contest, noting very good level of their preparation and innovative approaches to solving social problems facing Russian society. The participants presented interesting projects that have great potential, - Alexandra Mikhailichenko noted, the head of the business incubator of Moscow School of Management SKOLKOVO.

Eric Bertman, the CEO of Nokia Russia, expressed confidence in the success of services that received grants in the competition: Nokia has always been known for its innovations, that is why we decided to support this contest. The winners were determined after a long and arduous debate. We believe that the two projects - Social Button and Bardakovka - worthy of their awards and will benefit in solving important social problems.

The winners of Skolkovo architectural competition

The winner of the scholarship Skolkovo announced